Terri Neely stands with one of the items she sells in her shop, Terri Leigh’s Boutique.(Photo: Submitted)

Terri Leigh’s Boutique, located on the Murfreesboro Public Square, Murfreesboro, will open its doors as one of 31 venues at the 2017 Wine Around the Square (WATS) from 6-9 p.m. Sept. 16.

This is the second year to participate for boutique owner Terri Neely, who is a breast cancer survivor.

“I’m a big advocate for Saint Thomas Rutherford Foundation’s Power of Pink program and the services it provides to uninsured women,” she said.

In 2013, at age 46, she had been seeing a specialist every six months because of fibrocystic breast tissue.

There was no history of breast cancer on either side of Neely’s family, until she got a wakeup call that year when her first cousin discovered an abnormality in her breast and waited too long to pursue treatment. She had been uninsured and waited until her new insurance went into effect before she saw a doctor. By then, her cancer had extended beyond the region of the tumor.

When Neely went for her six-month appointment, a mammogram showed abnormality. Then she had a breast MRI, which indicated Neely highly suspicious areas of concern. She had a biopsy, and then a second mammogram-guided biopsy.

Finally, two days before Thanksgiving 2013, she received the diagnosis, and it was breast cancer. “I hit the ground running,” Neely said.

She had a double mastectomy in December 2013 and began treatment in January 2014.

Neely was Stage 2B, which meant her lymph nodes were included. Chemotherapy was the course of treatment. Just 11 days after her first chemo treatment, she began losing her long hair in chunks. “I think that was the first time I cried,” she said.

Neely went to Odom’s barbershop, her business neighbor on the square, to have her head shaved. When she walked into the shop, Chris, her husband, was waiting for her, and surprised her by having his own head shaved first. Sons Jacob and Jon-Thomas soon followed suit.

In 2014, Neely’s cousin died from breast cancer. Neely said she wishes Kimberly had sought help through the Power of Pink program, and she credits Kimberly with saving her life.

Then 18 months after her last chemo treatment, Neely opened her store, and it’s been “home” to her, as well as other customers who have found solace in her survival story.

Dotty Adams, the 2016 WATS honoree, wandered into the store one day last year. As they began chatting, both quickly learned they are breast cancer survivors. Another customer, after shopping at the boutique, turned to Neely on her way out and said, “I start my chemo on Monday.” They hugged and prayed.  “I can’t tell you how many people I’ve prayed with here in my store,” Neely said.

In the back section of Neely’s shop, beyond the reclaimed barn wood dressing room, is a gift shop with all things local. 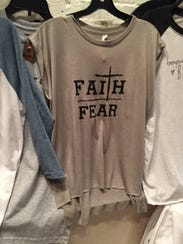 Terri Leigh’s Boutique sells unique tees and will be open during the annual Wine Around the Square. (Photo: Submitted)

“It all began with the T-shirt,” Neely said. A graphic designer with a BFA from MTSU, Neely created a T-shirt design with the words “The ‘Boro” shortly after she opened her store in January 2016. That special T-shirt complemented other local merchandise, including T-shirts, coasters, candles and pillows.

Neely said she hopes customers find their way to Wine Around the Square and into her shop.

“This little store has become so much more than an income for me,” she said.

For more information or to purchase tickets, please visit winearoundthesquare.org.